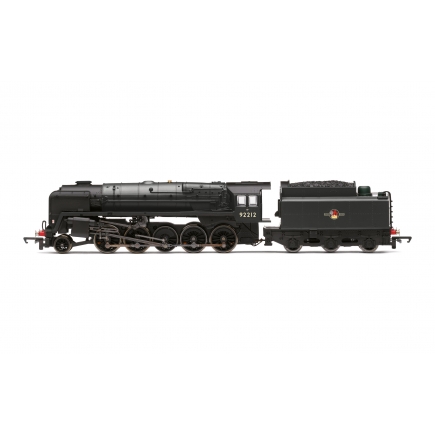 One of fifty-three Class 9Fs completed at Swindon Works, 92212 entered service on 22 September 1959 paired with seven ton, 5000 gallon BR1G tender No. 1519 and was first allocated to Banbury shed in the Western Region. On 17 June 1961 92212 was reallocated to Bath Green Park for operation over the Southern Region's Somerset & Dorset section, typically hauling eleven coach passenger trains over the hilly route between Bath and Bournemouth. By withdrawal from Carnforth shed in January 1968, 92212 had gone on to work for the remaining three British Railways' regions and had covered over 78,000 miles in just over eight years' service. Fortunately for 92212's future, the locomotive was sold to Woodham Brothers at Barry for scrap, arriving at the yard in September 1968 where it spent eleven years in storage before being purchased by 92212 Holdings Ltd and moved to the Great Central Railway at Loughborough in September 1979 for storage and eventual restoration.

That restoration was finally completed in September 1996, during which time 92212 was paired with the seven ton, 5,625 gallon BR1F tender No. 1181 that was formerly paired to 92092. 92212 spent two loan periods at the Severn Valley Railway, during winter 2000/1 and summer 2011, but it was while being overhauled at the Mid-Hants Railway between 2007 and 2009 that the locomotive was purchased by Jeremy Hosking. Since returning to service on 11 September 2009, 92212 has been based at the Mid Hants Railway, although it has also been loaned to the Bluebell Railway to provide motive power cover, as well as appearing at various steam galas as a guest locomotive. With the expiration of 92212's boiler certificate in December 2019, the locomotive is expected to be moved to The 1:1 Collection Museum at Margate during the course of 2020, although this is yet to be confirmed.