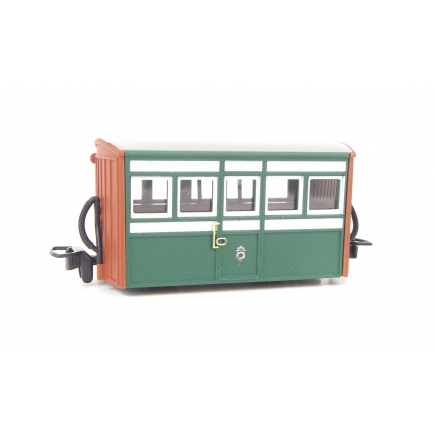 When the Ffestiniog Railway was reopened by preservationists in the 1960#s it adopted this green/cream and red livery for the coaching stock, including the Bug Boxes, which were still in frontline service. They did a lot of miles in this livery hauled by 0-4-0st 'Prince', which was also in frontline service and painted in the green livery that the Peco upcoming ready to run model of it will be offered.

The 'Bug Boxes', or formally 'Small Birminghams' were built for the Ffestiniog Railway by Brown, Marshall & Co in Birmingham between 1864-7, making them some of the World#s oldest railway carriages still in regular use. They have been in use on the FR as well as the Welsh Highland Railway throughout their lives and are still in regular use on both railways as part of the heritage fleet.
5