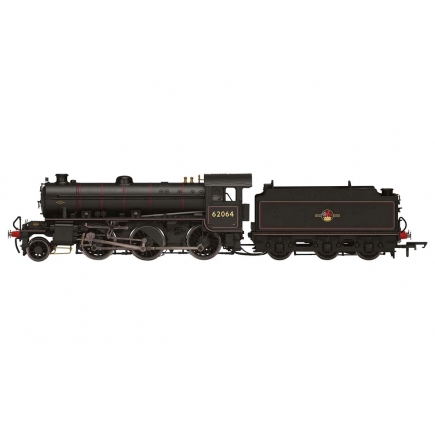 Inspired by Thompson#s rebuilt Gresley K4 in which it was reclassified as a K1/1, the only locomotive in that particular Class, A. H. Peppercorn took advantage of Thompson#s retirement in 1946 to develop the design into the K1 Class.

The K1 Class, which was made up of 70 locomotives, were all built in Glasgow at the North British Locomotive Company#s Park Works over a 10 month period between May 1949 and March 1950. As was the North British Locomotive Company#s all of the Class were sent to Eastfield shed, Glasgow for running in before being sent to England where they were used for both freight and express passenger workings. Thirty of the Class were sent to the Eastern Region while the remaining forty were dispatched to the North Eastern Region. Many of the North Eastern K1s were often seen as far North as Edinburgh and early on in their working life were regularly used on the West Highland line. A significant number of those allocated to the Eastern Region were based at March.

Locomotive 62065 entered traffic, allocated to Darlington Shed, on January 23, 1950 and in June that year the engine was transferred to Stockton Shed, where it spent nearly nine years. A short spell at Low Moor between June and August 1959 was followed by a final allocation to York, where 62065 spent the rest of its service life. Sold for scrap to A. Draper#s of Hull on July 4, 1967, the locomotive was finally cut up on August 28, 1967.

All of the Class were fitted with electric lighting and self-cleaning smoke boxes identified with an SC plate situated just beneath the shed plate while some were fitted with AWS (Automatic Warning System). The first 50 K1 locomotives were outshopped in black with #British Railways# emblazoned on the tender while the remaining twenty were released with the early BR emblem. From 1957 all of the Class received the BR crest.As described the Class were used throughout the former LNER network as they were proven to be an incredible mixed traffic locomotive with each of the Class being paired with a 4200 gallon tender as used with the LNER/BR Class B1 locomotive.

During the early to mid-1950s the K1s were starting to be transferred from the GE Section of the Eastern Region with the result that by 1961 only eight remained at March, however by the middle of 1962 these had been moved to Retford and Doncaster. Withdrawal of the K1s began in December 1962 but it was a very slow demise as it took a full five years before the last locomotive, 62005 was withdrawn from service on the Eastern Region in 1967. Luckily 62005 survived into preservation and can be seen operating, at the time of writing on the North Yorkshire Moors Railway.