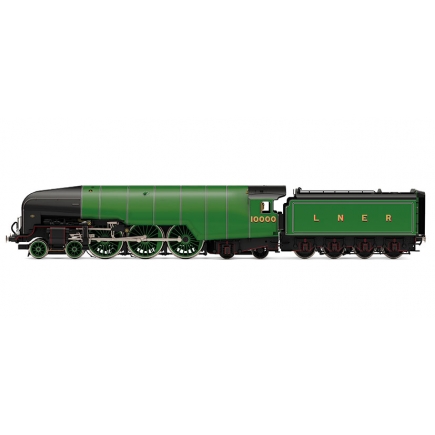 The first reference to 10000's designation as Class W1 was on 9 November 1926, but where the widely adopted name of 'Hush-Hush' came from is disputed. It could be that the nickname arose in the late summer of 1928, as news of Gresley's new locomotive began to leak out, however other sources suggest this was possibly an internal Darlington name that came from the distinctively quiet motion sound the loco made, or even because of a mistaken caption that featured in a PathÃÂ© News item. On 20 November 1929, nameplates were drawn up featuring the name British Enterprise and were cast soon after, but these plates were never fitted and the loco remained unnamed, being referred to as 'Hush-Hush' ever since.

Yarrow's had completed the boiler in February 1929 and on April 3rd the chassis was moved from Darlington to Glasgow for testing, these being completed by October 1929 and it was during this period that wind tunnel tests led to the unusual front-end design that gave the W1 part of its distinctive appearance. Official photographs were released on December 10th and the first trial run took place on December 12th, followed by another on December 29th and, on 9 January 1930, the first trip to Kings Cross, although it was to be a further six months of trials though before 10000 finally entered traffic on June 20, 1930.

At the end of January 1935, a Kylchap double blastpipe and chimney was fitted, which eventually required the fitting of a smoke lifter for better smoke clearance. On August 21, 1935, 10000 was returned to Darlington for the last time in its original form, having covered another 20,823 miles since June 1934. 10000 had proved to be extremely capable, but it was also unreliable, as out of the 1,888 days in service, the locomotive spent 1,105 at Darlington Works alone.