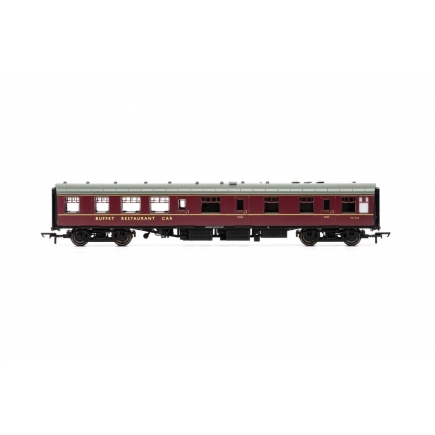 Propane gas units were introduced for gas cooking, reducing the reliance on electric power which, in turn, allowed for a smaller dynamo and battery. Access to the water tanks was also improved, along with door access for the catering staff; the single 24O doors being replaced with a 'door and a third' arrangement that offered a second 9O wide door alongside the main door. The prototypes were a success and 128 vehicles were ordered, built in four lots between 1960 and 1962 by Pressed Steel and Birmingham RC&W, but in a change from the prototype, some of the window sizes were altered and the serving area was rotated through 90 degrees to become longitudinal. By 1977, British Rail had come to realise that existing Mk.1 catering stock would have to be retained for a longer period on long haul services than originally anticipated, especially as the APT and HST programmes were behind schedule. The catering fleet was suffering as vehicle availability decreased and services increased, leading to a lack of morale among catering staff and an increase in public dissatisfaction with on-train catering; in 1960, 850 catering vehicles covered 794 daily booked services but by 1977 this had dropped to 460 vehicles covering over a thousand daily services.

Following a high profile public opinion survey, BR realised that catering needed to become part of the corporate InterCity image and an accelerated programme of refurbishment ensued. The onboard equipment needed to be standardised to ensure that spares were readily available to keep the vehicles in service, while at the same time interior layouts needed to become standardised so that serving patterns were consistent across the fleet to improve working conditions for staff. The resulting fleet refurbishment of all catering vehicles was based on alterations to the diagram 24 vehicles and was grouped under diagram 33 RB(R).


Doors were installed between bars, pantries and kitchens which allowed for manning by fewer staff and interiors were improved by raising illumination levels through fluorescent lighting and removing bulkheads, using brighter colours and having 'wipe-clean' surfaces and seating. With no Mk.2 catering cars being built from new, Mk.1 restaurants and buffet vehicles were included in Mk.3 rakes on the major main lines until the Mk.3 catering coaches became available. Certain services continued to use them into the early 1990s; The Clansman and the Holyhead trains had RBRs in 1990/1991 and Norwich services still had them in 1993 according to the coaching stock book. Once the Mk.2f RFBs were fully in service, especially on Intercity cross country services, there was no further need for Mk.1 stock and the vehicles were relegated to charter stock.
5